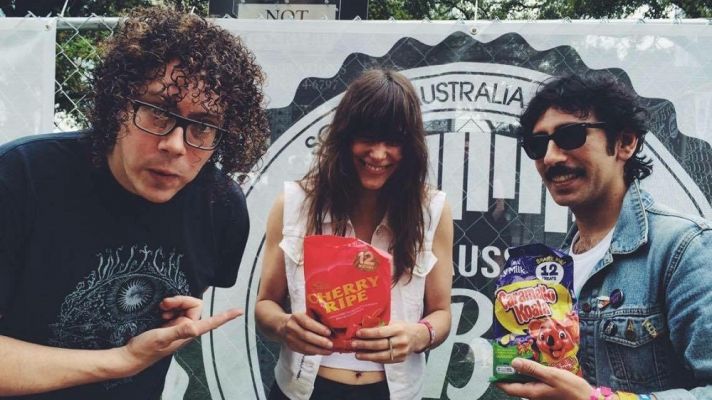 Melbourne fuzz-rock outfit Pretty City have been putting their time at SXSW to good use, sharing the Aussie snack love around and eliciting some interesting reviews.

The results are in.

Fran Healy, front man of Scottish band Travis was just casually sitting on some steps when I accosted him. He was at SXSW to promote their new album with a short film they’d made. It was great to see they were still creating and rocking out. New material sounded good and the film was a cool creative way to share it. On Cheezles, there was Initial trepidation over “made with the GOODNESS of real cheese” rather than just made with CHEESE written on side of box but after the shock of how bright the box was when he opened it his final verdict was “oh my god, they’re amazing!” Well I know what to send him for his birthday now.

Swaan Miller and Dave Dupuis from LA band Nightmare Air were dying to try the Aussie delicacies I’d brought. We played with them a few nights before and were blown away by their heavy, electro rock. Like Garbage meets Black Rebel via Interpol. Dave said, “Swaan was a hippie kid that wasn’t allowed sugar, so will be on a mad sugar high.” I was slightly afraid this was going to turn out like Rod and Todd from The Simpsons. Swaan said, that Cherry Ripes taste like a Bounty followed by “so, we’re at a children’s birthday party now?” Which is pretty much spot on. I certainly feel like I’m at a kid’s birthday party handing out lollies and chips to everyone all day! Dave thought that Cherry Ripes were “fucking delicious.”

Stonefield had just come off the Aussie BBQ stage when I demanded they try Tim Tam slams. They had also played about six shows already with another few to go. So if you thought you had it rough at SXSW, these gals are made of steel. Amy and Holly were keen to try them, though after all the hyping I had done we failed miserably. Let this be a lesson to any budding Tim Tam slam novices out there. Make sure your beverage is hot or you end up with a holly mess and no slam. But Amy said “I can imagine it would be really good.” I felt like that was a pity remark to make me feel better for completely stuffing this up. To be continued.

Manny has been a mate of ours for ages. We always bump into him drumming in different bands and it’s always good to see him killing it in every band he’s in. Right now he’s drumming with Harts and they killed it at the Aussie BBQ. However the real Manny came out when I pulled out the shapes. On BBQ vs Pizza Shapes: “I prefer the chicken ones.” Ouch! Sorry bud. I’ll bring them next time.

Eric Nyffeler is a designer and poster artist who was displaying his work along with dozens of others at the convention centre at SXSW. He’d done posters for tonnes of bands and had a great eye for colour and boldness, making his posters really stand out for me at the exhibition. He’d done the first USA tour poster for Gotye so we got to chatting about that. On BBQ vs Pizza Shapes, though, he was critical. “First up these are not pizza shaped.” I know. Kills me every time, mate. Also lots of confusion over what the hell BBQ was supposed to taste like. Overall vote went to BBQ. Which was a shock for him being a big fan of pizza.

Eau Rouge are a German rock electro pop band. Managing to smooth over heavy rock riffs into some killer pop hooks. We played with them the night before and they looked like they were still feeling the effects of the after party when I met up with them at their hotel lobby at 2pm. I thought I’d get them to try Caramello Koalas, and Iced Vovos. Overall they were very positive on all the Aussie goodies I had in my bag. “That’s some good stuff” was the consensus on Caramello Koalas and on Iced Vovos, “my girlfriend would like them”. Either they were very polite or we need to be shipping our confectionery there. I think I may have found a way to fund our next OS visit.